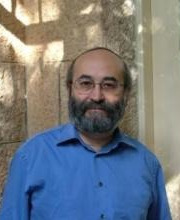 Studied Philosophy at the University of Rome (currently "La Sapienza University"), earning his doctorate degree with a dissertation on Aesthetics and Literary Theory (1974).

Since 1976 he has been teaching at the Department of Italian Literature at the Hebrew University. He has also taught at the Department of Hebrew Literature (1978-9, 1986-7), the Department of Comparative Literature of Bar Ilan University (1990-1), and the "University Statale" of Milano (where he lectured on Italian translations of Hebrew Literature, 2003-8). Presently, he teaches at the Department of Romance and Latino American Studies at the Hebrew University, as a Teaching-Fellow. He has worked as an editor (for Keter Publishing House, 1988-9), published articles on literary criticism (in "Haaretz" Daily), and is still involved in intensive translation activities, from Italian into Hebrew and vice versa. Translating into Italian, he has published several anthologies of poems by Amichai, Zach and Wieseltier, as well as a comprehensive anthology of contemporary Israeli poetry, "Poeti israeliani" (Torino, Einaudi 2007). Translating into Hebrew he has published an anthology of Modernistic Italian Poetry, a new version of Boccaccio's "Decameron" (completing and editing the unfinished Gaio Sciloni's translation), and the first Hebrew translation of Vico's "The New Science"(Jerusalem, Shalem Press 2005). His Hebrew translation of Primo Levi's poems has been published in 2012 (Jerusalem, Carmel Publishing House). At present he is completing the first Hebrew translation of Galileo Galilei's "Dialogue concerning the two Chief World Systems".  He published several literary essays on Modern Italian literature (on Svevo, Pirandello, Moravia, Pavese, Bassani, Calvino and others), as well as many comparative studies about the relationships between Italian and Hebrew literatures  in  Renaissance and Baroque periods, among them : "Per una classificazione delle ottave di Josef Zarfati " (Italia VIII, 1-2, 1989, ps. 75-86, in Heb.)  ; "Poetiche della scuola ebraico-italiana" (La Rassegna mensile di Israel, vol. LX, n. 12, gennaio-giugno 1994, pp. 189-226); "Lingua letteraria e lingua santa nel Leson Limmudim di Moseh Hayyim Luzzatto", (in: Luzzatto Voghera – Perani (ed.), "Ramhal – Pensiero ebraico e kabbalah tra Padova ed Eretz Israel", Padova, Esedra 2010,  pS. 97-114). His major publication in this area of research is a full annotated edition of the Baroque Hebrew poet Joshua Levi of Venice ("A cup of consolation and other elegies", Jerusalem, Ben-Zvi Institute 2013). He is an adviser for the National Council of World Literature (Translations from World Literature), and a member of the Israeli Editorial Board of the "Rassegna mensile di Israel". He was awarded the International Flaiano Prize for Italian Studies, for his translation of Vico's "The New Science" (2006). His research focuses on comparative analysis of Hebrew and Italian literary texts, on Poetics and Literary Theory, and on Theory of Translation. His fields of study are: Medieval and Modern Italian Literature, Hebrew-Italian Poetry and Poetics.