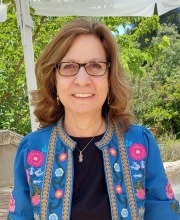 Visiting Professor
Visiting Professor
Camelia Suleiman (Ph.D. Linguistics, Georgetown University), is an associate professor at the Linguistics and Languages department at Michigan State University. She has led the Arabic Program from 2012-2020. Her research interests are in the Sociolinguistics of Arabic and its contact with Hebrew, on language, race and gender and the nation, language and the media and the Israeli-Palestinian conflict. Her publications include: The Politics of Arabic in Israel: A Sociolinguistic Analysis. University of Edinburgh Press. May 2017, and Language and Identity in the Israel-Palestine Conflict: The Politics of Self-Perception in the Middle East. November, 2011. London: I.B. Tauris Press. Her articles appeared in ‘Journal of Psycholinguistic Research, Pragmatics, Middle East Critique, The Middle East Journal of Culture and Communication, Middle East Studies Association Bulletin, Social Media and Society, and others. Her research also received several awards, press releases, and media coverage.
See also: Academic